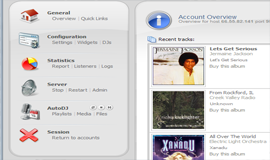 Centova Cast version 3 is the very latest and advanced web based streaming control panel + automatic dj system in the industry. The Centova v3 panel supports and controls SHOUTcast v1, SHOUTcast v2 and Icecast servers, and includes the latest in features such as automated song requests, dj manager with automated switching from auto dj to live broadcast (xFade) and more.

Centova v3 DJ Manager This system works with both the older SHOUTcast DNAS and the new v2 SHOUTcast - you can manage all your dj's and have complete control over their actions on your server. No need to install special scripts, no configuration required, have all your dj's set up and scheduled in no time! General Rotation Playlists handle the bulk of the media played on your stream. By creating multiple general rotation playlists with different "weights", you can ensure that popular tracks (such as new releases) are always played more often than your less popular tracks. Scheduled playlists play on a specific date, at a specific time, and can be configured to repeat every day, week, month, or year on a recurring schedule.

Scheduled Playlists are ideal for daily/weekly countdowns, pre-recorded shows, weather forecasts, or any other media that you'd like to have Centova Cast play automatically at a specific time.

Immediate Playlists play immediately when they are activated (after the current song completes). They are ideal for spur-of-the-moment playback of tracks such as requested songs or announcements.

Interval Playlists play on a recurring basis, either every few minutes, or after every few songs. Average session length is charted and graphed, and top listeners are ranked according to listener minutes and number of sessions. Listener countries are automatically determined, and the software used by the listener to tune into the stream is noted and identified as a media player or stream ripper to assist in abuse detection. The country overview provides information about the countries from which the majority of your listeners are tuning in. Top listener countries are charted and graphed according to listener minutes and number of sessions.